MY VILLAGE. Frank Vanleenhove, the man who taught King Philippe how to surf: "When the Beach Boys performed here, Knokke-Heist was truly California for a moment".

He taught King Philippe how to surf and is the country's newest supplier to the court. Furthermore, there is probably no one in Knokke-Heist who does not know Frank Vanleenhove (60). The manager of Surfers Paradise and Lakeside Paradise takes us through his childhood years, shows us where he grew up and tells us what he still dreams about. In between, he also shows us the most beautiful and least beautiful sides of Knokke-Heist.

This is where I grew up

"I was born and raised in Knokke-Heist and experienced a carefree childhood. The Zegemeer and the forest where Scharpoord now stands were my playgrounds and the green square where petanque is now played was my football pitch. As a teenager, this area extended over the entire territory, because I was an outdoor kid and my bicycle was my freedom. I spent many hours on my skateboard in Duinbergen, where the municipality had made the runs traffic-free. I went to school at the Royal Athenaeum where my father was study prefect. When I left the parental home, I lived successively in Duinbergen, Westkapelle and Heist. Even then I enjoyed the holiday atmosphere that our municipality exudes and gratefully took advantage of the full range on offer, especially in the field of sports. I went through all the youth series at RKFC up to and including the reserves, went swimming in the Swimming Pool, Binnenhof and later La Réserve, played squash in the Laguna and later Campo Sportivo and also dived into the then still vibrant nightlife : Number one, MD's, Xenon, Dino's, Stradivarius, Wiener Weinstübe, 050, stax, king, El gringo, bananas, Gin..." 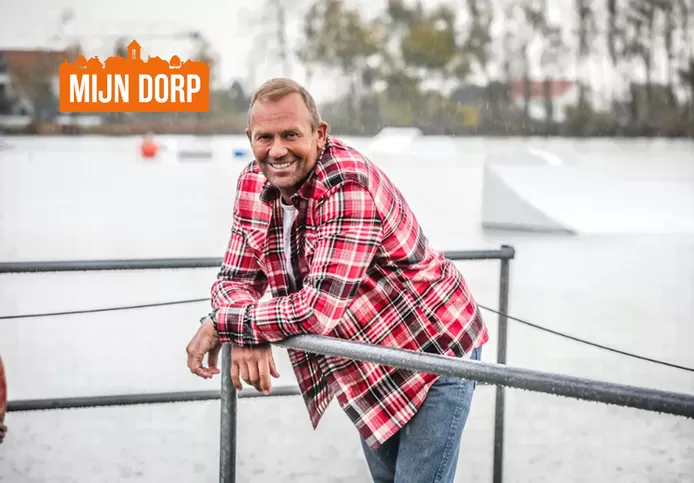 My favourite spot in the borough

"Without a doubt: the sea. While then you also can't go around the beach of course. I practise just about every water sport you can think of or that has been added over the years: windsurfing, surfing, kitesurfing, supping, foiling in all its guises... The sea is different every day and at sea I feel good. After every session, I still walk onto the beach with a broad smile and carry that vibe with me for a few days or a week. No other sport does this to me. Even in winter, the sea doesn't let go of me and we also go ice bathing regularly."

My favourite running or walking and cycling spot

"I go walking very regularly with Natalie, my wife, and sometimes she really begs me to walk somewhere other than along the dyke. There is so much to see there, and then there is the difference between summer and winter. In winter that loneliness, closed businesses, shutters closed... and in summer that bustling hustle and bustle. Early in the morning the bathing cart owners setting up their beaches, the terraces coming alive. We also go out a lot by mountain bike towards Park van Heist, the polders, the singletracks towards the Zwin and Ostend, the coastal route to Breskens ...just mighty!" 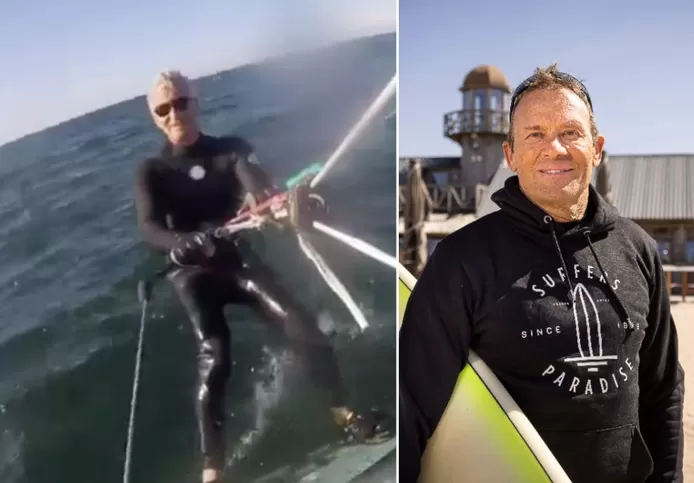 This is where I relax

"I love just sailing down the coastline of Knokke-Heist with the wind straight from the sea. Although I am not quiet by nature and always want something to do. Where I really unwind? At home in my bed then (laughs)."

The fellow villager I admire most

"The people I admire most are in fact my family with whom I keep both Surfers Paradise and Lakeside Paradise on track. My daughter Joyce who rolled into the business from a young age and now fully knows the ropes, our son-in-law Quincy Lambert who was at the cradle of Lakeside Paradise and runs the day-to-day management there with my wife Natalie. So I put my wife on a special pedestal. You can't call ours a normal life. Being available 7/7 and 24/24 and knocking 18-hour days as co-manager. And all this without batting an eyelid, while we also have a household and two children to raise. She also manages to rein me in a bit, which is sometimes necessary. And she does all this with a smile and endless patience. I cannot imagine a better best village companion."

My favourite café and restaurant

"Breakfast I like to do at Lebeau, Blé D'or and the Pain Quotidien. Lunch I find perfect at Enso and the Cap Nord. Dinner at my bosom friend Jean Van de Boudin Sauvage, at triathlon friend Fré from the Brasa, and I'm also looking forward to the opening of Bistro Mariette on Schapenbrugge. If it can be a little more than that then please Il Trionfo at the Pungitores."

"O'Neill is my lifelong sponsor so Chill Out on Avenue Lippens. When Natalie gets tired of seeing me in surfy clothes we usually pass by Frans Boone Store, authentic and top service. Outside our municipality that in turn is Icarus Surfshop in Zeebrugge of course." 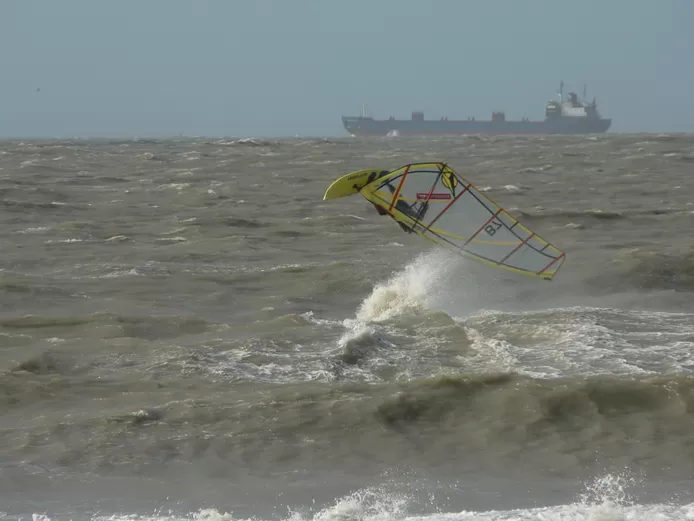 My finest moment or memory

"A very difficult question because fortunately enough, my life so far has been a succession of great moments. However, one event I will never forget is the Beach Boys' performance on 21 July 1987 at the exact spot where Surfers Paradise is today. I still call it the hallowed ground. I was also organiser of the accompanying Windsurfing Festival at the time, but the day of the concert it was windless, super hot and sunny. To avoid the crowds, I then sailed there by zodiac with some friends, surfboards along, and we anchored the boat. Only then did we realise the magnitude of this event: 15,000 people on the beach, an unbelievable stage, with all my rigged windsurfing sails serving as decoration in the background. We wriggled to the very first row in bare torsos and thoroughly enjoyed the array of top hits they performed one by one. Knokke-Heist was truly California at that time."

With this person I have the best connection in Knokke-Heist

"My star sign is twins and it seems that this makes you strive for variety, and this is true in my rather predominantly sporty circle of friends. I have padel football and volleyball friends, surfing, windsurfing and kite friends but the bond I have with my cycling friends is still unique. And there are a lot of them, because I belong to several cycling clubs: De Jumpers, De Bumpers, De Buuzestampers, De Maddies, De Molletjes...and more recently the coronatrappers. Surely the bond you forge during and after cycling is very unique."

"I have always been very afraid of the expansion of the port of Zeebrugge. A busy world port next to a top tourist town is very difficult to reconcile. If I am sleeping at night or I find myself on the dyke and you hear the port activities... scary right? The least beautiful spot for me is what we call 'the black mile' - the stretch of dyke in Heist next to the port. Every time I walk there I still feel for the people who have a flat or a business there, even though there aren't that many of them by now." 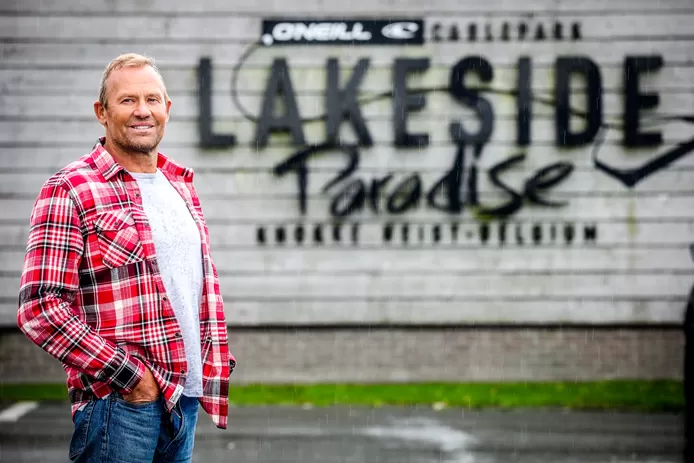 This could be better in my municipality

"Of all the graduates in my class, I think there are still three of us who were able to continue living here. If I hadn't had my parents, I wouldn't be living where I am now either... Because Surfers Paradise has been around for 35 years, I have seen countless young people grow up there and when they moved in together or got married, I have seen them leave one by one because they couldn't find suitable housing with us. That is unfortunate. In fact, you can see from everything that we need new young people in our municipality, but that is a social problem that you can't just solve in one two-three of course."

I still dream about this in Knokke-Heist

"Achieving a Wave Pool in our municipality would be the icing on the cake. With Surfers Paradise and Lakeside Paradise we are already on the world map, an artificial lake on which all surfers could surf on real waves would undoubtedly give our municipality an extra boost and attract young people here. We would live up to our name as Surf Capital and surfers from all over Europe and the world could come to Knokke-Heist to surf."

This is my house

"In 1950, my parents had the stroke of genius to buy a piece of land on Lake Zegemeer, right opposite Hotel La Réserve. I grew up there, in villa Euclid, after Euclid's theorem because my father was a maths teacher. When we renovated the house, we kept the name and I could further enjoy the surroundings: by the water, centrally located close to the sea, yet close to everything. We adapted the house a bit in line with our lifestyle and together with Natalie, I hope our children Faye and Ike can have an equally uncontaminated childhood there."