This year the Belgian Championships wakeboarding and wakeskating cable were organised in Charleroi at "The Spin" Cablepark.

After an exhausting qualification day on Saturday, it was time for the finals on Sunday. 23 members of the Tomorrow Team were ready to give the best of themselves. This resulted in no fewer than 5 Belgian titles and 12 places of honour.

The Mini Boys (up to 11 years of age) stage was even entirely in the colours of Lakeside Paradise. Ike Vanleenhove, Emiel Lauwers and Elian Coosemans. Three comrades who train together every week, fought for the gold. In the end it was Ike who took place on the highest scaffold, ahead of Emiel and then Elian. Fair and very fair, because they could have awarded it to each other in a different order.

Sacha Delpierre, also from Knokke-Heist, was unstoppable in the Boys category. One spectacular trick after another. He was clearly having a top day. A more than deserved winner according to the experts on the sidelines. There were even speculations that Sacha, with what he showed that day, could simply compete at European level.

In the Open Ladies' category, Johanna Dory delivered another surprise. A very nice 3the place is the result of one year of wakeboarding. That promises for the future. Besides Johanna, Pauline Appelmans lived up to her role as favourite for the girls. She continued the good form of the European Championships and made it to the BKs.

For Glenn Vandenberghe, 2the in the Open Men, the icing on the cake was unfortunately no 1ste place, but it was the very first time that he was able to keep Wim Kooij and Axel Tack behind him in a race. A confirmation of all the hard work.

Also in wakeskating, which is wakeboarding without your feet being attached to the board, the coast boys of Lakeside Paradise did not do badly. 7 competitors managed to score a total of 4 medals. Jay Michel managed to keep his place at the top of the Junior Men Wakeskate with a good first run. Louis Eggerickx and Arne Albrecht also showed their skills in this discipline, unfortunately they came just short of fighting for the top place.

After a full season of training under the watchful eye of trainers Axel Tack and Simon Van de Gucht, these results are simply stunning.

On the photo: the future and the entire podium from Knokke-Heist vlnr Emiel Lauwers, Ike Vanleenhove and Elian Coosemans. 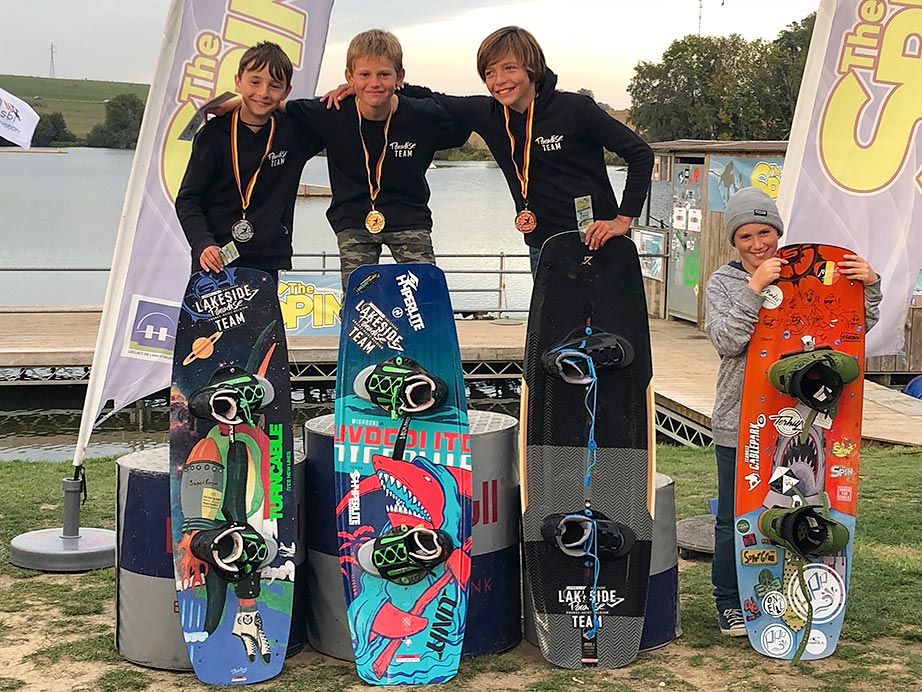 Parking in front of the clubhouse not available
on 26-27-28 August!