This weekend at Wake Up cable in Antwerp the Belgian championships Wakeboarding and Wakeskating were held.
No fewer than 132 participants were registered, 38 of whom were from the Lakeside Paradise Tomorrow team.
The participants competed for the places of honour in 13 categories, accounting for 39 medals.
The rainy weather could not spoil the fun - you get wet anyway in this business!

The Tomorrow team managed to secure 6 Gold, 9 Silver and 4 Bronze medals, making it no less than 6 Belgian champions and a total of 19 medals!
Pauline Appelmans' fifth consecutive title is certainly worth mentioning.
Also noteworthy was the Belgian title of Louis Eggerickx, who is still a Junior, but entered the men's category and took first place.
Casper Van Hemelryck-Bray also distinguished himself by winning the U18 as a 15-year-old.
Finally, Elian Coosemans was able to climb the U14 podium twice thanks to strong wakeboarding and wakeskating.

Lakeside Paradise will remain open daily until the end of the autumn holidays.
On Sunday 17 October there is the UFO session where anyone can wakeboard for free provided they use an Unidentified Floating Object or go on the water in disguise.
Saturday, 23 October, all members will be invited to the King & Queen of the Lake, which will designate the 2021 club champions.
After the autumn holidays, the cable car will remain open throughout the winter on Saturdays, Sundays and public holidays from 1 pm to 4 pm.
Cost is 30€ with material included or 20€ with own material.
It is also possible to purchase a cheap winter pass.
From 16 October, everyone can enjoy a new winter menu in the Restaurant and on Friday 29 October there is the Halloween torchlight procession and BBQ.

On the photo: a happy Frank Vanleenhove and Natalie Camerlynck together with all medal winners. 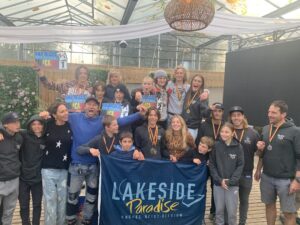